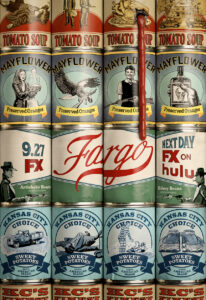 If you haven’t seen the television series Fargo, with ties to the classic Coen Brothers movie of the same name, are you ever in for a thrill! We at ReallyRather are big fans, and apparently so are a lot of others, as the quirky limited series is an Emmy®, Golden Globe®, AFI, Peabody and TCA Award winner.

Created and often directed by Noah Hawley, Fargo Season 4 was originally slated to premiere Spring 2020, but the Coronavirus pandemic halted production until late August. Now we’ve been given an ETA, as well as some other juicy tidbits about the upcoming season. Take a look:

The eccentric and intriguing anthology series, inspired by the work of the Coen Brothers, finally gets a premiere date. Behold Fargo Season 4!