The holiday season is upon us. Not only does it bring with it turkey, trees, and tinsel, but also some of the biggest, brightest blockbusters of the year.

This year’s crop of star-studded Oscar bait seems especially promising; some of these films were held back by studios until folks could go to the multiplex and see them on the big screen.

Not everyone is comfortable returning to a crowded theater these days, where people are laughing, gasping, sometimes coughing and sneezing, while munching on popcorn and slurping drinks. So what’s a cinephile to do?

Simple: Just grab some snacks, then plant yourself in a cozy lounge chair in your very own home theater.

Luckily for you, we’ve found five wonderful houses with home theaters that are currently for sale.

Just be aware that most homes outfitted with their own movie theaters don’t come cheap. The houses that can spare the square footage to accommodate a home theater are usually on the posh side of town and have price tags to match.

But look on the bright side—for these prices, perhaps you can get them to throw in a year’s supply of popcorn and soda. Save us a seat!

5 Houses with Home Theaters Currently on the Market

Once Upon a Time in Hollywood: Probably the most stylish on our list, this exquisitely decorated home theater can be found in a brand-new, four-bedroom home in the Hollywood Hills.

The theater—and the rest of the 4,800-square-foot residence—features cutting-edge technology and high-end finishes, befitting a home in the nation’s movie capital. A number of additional large screens are placed in front of comfy sitting areas throughout the house.

For further viewing pleasure, the multiple floor-to-ceiling retractable glass doors reveal sparkling canyon views. This home looks as if it could actually be in a movie. Watching one there might be just as cool, though.

This four-bedroom residence features a plush theater with tiered seating in the basement and a giant, drop-down screen outside by the pool. The outdoor screen can be viewed from multiple decks and balconies, or from the spa, or even while floating on an inflatable lounger—if you don’t mind soggy Milk Duds.

Inside, the theater is accessed by a staircase painted to look like Alice in Wonderland’s rabbit hole. Besides the big screen, the basement contains a cool game room and a huge family room with three built-in saltwater fish tanks.

And because one is never enough, there are two saltwater pools outside, along with waterfalls, grottos, and fire features.

The Longest Yard: You gotta love a theater with a marble-topped bar in it, for those who want a full dining experience while watching a movie or game.

But this acre-plus estate goes far beyond the luxe bar in the theater room.

Posh European-inspired design extends into other entertainment options—from the wine bar to the billiard-room. A huge highlight in the four-bedroom home is a master suite with a three-level closet.

Outside is a casita—so guests don’t have to drive home after a late-night movie marathon—as well as a large courtyard pool that would have Esther Williams doing backflips.

Price: $2,499,000
No Time To Die: This sophisticated, paneled theater is set up so you you can watch the big game as well as your favorite films. To keep the party going, there’s a 700-bottle wine cellar, a luxurious kitchen where movie snacks can be prepared, and green lawns for that family touch football game.

Which is to say, this stately Connecticut five-bedroom Colonial offers something for everyone. It sits on a 1.8-acre wooded lot and is only a few minutes away from the train station, where you can be conveniently whisked away to your own “West Side Story.”

In the summertime, you can take a dip in the in-ground pool and dry off in the guesthouse before running upstairs to catch a movie. 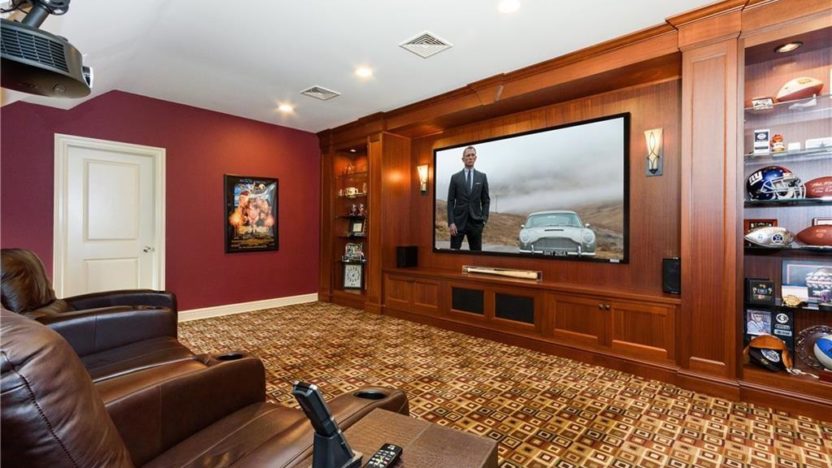 Fantasia: This 125-acre estate is the closest you’ll ever get to Disney World in Missouri.

Other indoor attractions of the four-bedroom mansion include rustic wood beams, stone flooring, multiple stacked stone fireplaces, and a massive chef’s kitchen with double everything and a luxe butler’s pantry—pretty much everything you need for your own private Fantasyland.

If you’d really rather not go back to the cineplex yet, here are some amazing options for great houses with home theaters